Lengthy autograph letter signed in Cyrillic, not dated [1959], by the Soviet Armenian composer, author of the Armenian national anthem. Khachaturian addresses “Esteemed Mitrofan Kuzmich”, director of the Moscow Philharmonic Society, on behalf of the Soviet composer and critic Valerian Mikhailovich Bogdanov (1903-1971)[translated]: «…I have received a letter from the estemeed Leningrad composer Valerian Mikhailovich Bogdanov Brezosvsky [a gloomy composition] in which he rightfully [bemoans] [his fate as a composer and in particular] the fact that his compositions still haven’t been performed in good halls in Moscow. Bogdanov-Berezovsky is one of the esteemed and actively working composers who have won for themselves [already] both respect of listeners and of musicians. His many-sided and very useful musical activity have given us all [estemeed Mitrofan Kuzmich] permits me to turn to you with a concert request. Columns or the Tchaikovsky Hall, produce the concert for violin with orchestra by Bogdanov-Berezovsky [there is] The soloist performing this concert being the Tchaikovsky competition laureate, the young violinist [Viktor] Liberman (1931-1999). The concert is recently finished and has not yet been performed. I ask earnestly, Mitrofan Kuzmich that you let me know through your secretary of any results of decisions by you to issues I have submitted. [With this request I turn to you not only as a composer, but as secretary of the union of composers of the USSR] I want to be sure that you will comply with my request…». At the time Kachaturian wrote this letter, he had only recently completed his Piano Sonatina in C Major (1959) as well as music for Shakespeare’s King Lear (1958). 3 pp. (4 x 5 ¾ inch.) on graphic paper with torn spiral notebook perforations at the top edge. 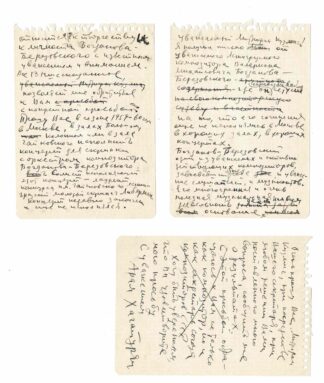